Knitting for the beloved

My mother-out-law is a charming and delightful woman who is a fabulous seamstress.   (I say out-law because her daughter and I are not married, and not likely to be… and there is no option for our marriage in this country for us even if we were marrying types).  She clearly sewed wonderful garments her whole life and keeps telling me this latest frock will be her last and that she is giving up sewing, now, in her mid eighties.  Knitting she likes less, and has less confidence about.

I think the answer is all about love.  The love of her husband of over 50 years, and the love of the friend who can no longer knit who gave her this delectable yarn.

Over the last 3 or 4 years I have had progress updates.  At one point I turned a pesky purl that had slipped into the stocking stitch of the garment–fifty rows back–into the knit it was always destined to be.   The friend who taught me that trick has earned my undying gratitude!  At some stage I cast on the front and knit the ribbing for that.  When they visited recently it was clear that the enormity of the task was grinding her down,  with the back finished and about 1/3 of the the front done.  So I offered to finish it, with some trepidation about whether my skills would be up for the job at the level required.

I chose needles a size bigger that she had been using, because she is a loose knitter and I am a tight knitter, and hoped for the best.  I knit away for some while before I realised there was an added stitch with a companion decorative hole, beginning an additional column of stitches well below the marked line where her knitting ended and mine began.  I ripped back and started from that new point.  After a while I saw that I had made a hole and a new column of stitches exactly the same way, ripped back again and continued up.  I got to the neck with some excitement and then realised it looked wrong.  On closer inspection, and with new respect for the improvements in pattern drafting I have enjoyed having taken up knitting long after this one was printed, I realised I was trying to knit a v neck using the instructions for the crew neck.  I ripped out that side of the neck and then a good 20 cm or so to get to the point where a v neck should begin… and then went again.  I cast off the upper edges too tightly for them to match the back and had to rip that out and re-knit.  Then I soaked it overnight and set it out to dry.

After all that had gone wrong so far, I was immensely relieved to see all the puckering and the line where the baton passed from one knitter to another had vanished and the fabric looked great! Next, for the finishing parts… seaming, neckline and arm bands.  Instructions that go ‘pick up and knit 186 stitches evenly…’ always freak me out a bit!

Toward the end I was being cheer squad at the Moana Beach Triathlon and could not resist a Yarn Harlot shot of the vest at the beach.

By the time you read this, the vest will have been reunited with the first knitter and then with the intended wearer.  I hope they both love it.  I certainly love them profoundly for making me so welcome in their family. 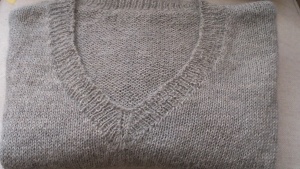 Tagged as alpaca, friendship is the best form of wealth, user error

12 responses to “Knitting for the beloved”