In preparation for a natural dyeing workshop

As I write, I’m preparing to run a workshop at my Guild.  I’m counting down and there are only a few days left.  Preparation has been going on for weeks now! I’ve skeined beautiful organic wool and mordanted some.

I’ve washed fleece in two colours and two breeds, and mordanted some.  I’ve decided being able to mordant cold in alum is a real benefit to preparing unspun fibres.  Less opportunity for felting or simply mooshing the fibres.  Three cheers to Jenny Dean, who introduced me to the idea of cold mordanting with alum. 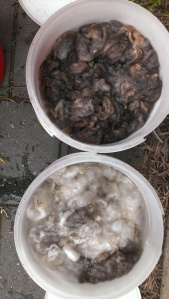 I treated some merino roving to a cold alum bath too. Later I decided that past unlovely experiments with paj silk could go in the mordant bath with a view to being overdyed.  And added silk embroidery thread.

I have been packing things into bags and writing lists. I’ve begged milk bottles from coffee carts and turned them into sample cards. Finally, on the weekend, I wandered the neighbourhood on my bike gleaning leaves, and finding some damaged pomegranates that might be used for dyeing–the rats that were scampering along the fence nearby had clearly been having a banquet!  It was overcast, but can you see these two E Cinereas forming an arch at the end of this street?  Cute as a button!

Ironbarks were oozing kino, which is their main strategy for avoiding pest attack.  This one seemed to have gone a bit too far…

Some ironbarks were in flower. Gloriously.

In some streets there was a carpet of flowers on the ground where lorikeets and rosellas had been partying.

Some of the neighbourhood E Cinereas have recovered from the most recent attack of the chainsaws a bit.

I stopped off at my favourite E Scoparia on my way home.  It now has some leaves I can reach for the first time since a bough was lopped a couple of years ago.

So, I came home fully laden.  I even found an E Cinerea branch that had been cut some time ago but must have fallen to the ground more recently. Needless to say, it came home with me.

Hopefully, my preparations are nearing completion.  I had a dream the other night where my workshop went terribly wrong… for one thing, there were two workshops and I had not prepared for the first one at all… and the Guild hall, which is a bit of a rabbit warren, had several rooms that I had not previously seen!  Perhaps it is the idea of using cochineal for the first time acting on my overdeveloped sense of responsibility…

7 responses to “In preparation for a natural dyeing workshop”