Do you read those articles that come out every once in a while announcing the words that have been added to the dictionary since the last edition (like this and this?) and perhaps lamenting those that have gone into disuse?  I do.  I have a long standing love affair with dictionaries that began when I was a primary school child.  I had the insight that I could never get in trouble for reading the dictionary under the desk during classes while I was still in primary school.  I must have been regularly bored, or gripped by the dictionary, because I read it a lot.  Strange events followed, like the time I used ‘annular’ in a sentence, in a primary school story.  At the time we lived in the middle of Western Australia, where this was evidently unexpected.  I had a teacher who was capable of raising just one eyebrow, a skill I wistfully hoped to master and practiced a lot, without much success.  ‘Annular’ caused those expressive eyebrows to rise much higher than usual! 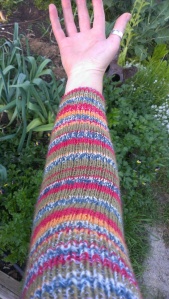 I digress, but I am sure you had noticed.  I believe it was in Richard Rutt’s history of hand knitting that I found the word ‘scogger’. One of the happy moments of my young adult life was coming into possession of a Shorter Oxford dictionary, and ‘scogger’ is in it, right beside ‘scofflaw’.  It is defined in the OED as ‘A footless stocking, or a knitted article of similar form, worn either as a gaiter or as a sleeve to protect the arm; also the foot of a stocking worn over the boot to prevent slipping on ice’ and attributed to a northern dialect.  The examples listed go back to 1615: ‘R. Brathwait Strappado 130:   Fute-sare I was, for Bille shoon had neane..Nor hose-legs (wele I wate) but skoggers aud, That hardly hap’t poore Billes legs fra caud.’

Anyone who is wondering–especially anyone who has a native language other than English–should understand the meaning of this statement is not self evident me either.  At a guess: ‘I was footsore, for I (Bill) had no shoes… Nor leg warmers, but only old scoggers, that hardly kept my (Bill’s) poor legs from the cold.’  ‘Wele I wate’ has me puzzled even after some digging around. ‘Wele’ could mean ‘we will’ or  ‘choose’ according to OED or ‘weal’ according to one online source.  ‘Wate’ could mean ‘wait’ or ‘what’.  So this phrase might mean ‘while I wait’ and require context… or might mean something completely different!  The wonders of the internet make the whole poem available!  This makes it clear Bill is describing his rise from poverty and wretched, inadequate, hand-me-down clothing to rather finer garb.

This scogger is for a friend who has a plastic elbow joint.  She feels the cold in it rather badly, though unlike poor Bille in the example from the OED, she certainly does have shoes!  This scogger is destined to warm her elbow on chilly mornings when she is tending to the hens and donkeys and on cold evenings when she’s checking on them again.  That’s me modelling it (ah, the challenges of taking a photo of my own arm!), and I admit, she is a different shape–but she’s tried it on and declared it suitable. It’s made of dependable sock yarn and shirring elastic, knit into the ends to ensure snug fit, as requested.  It comes complete with an elbow for maximum movement, and needless to say, since I knit it in meetings, on buses and in queues, quite a few folk have been introduced to the scogger: both the word and the article.

Tagged as dictionary, friendship is the best form of wealth, gifts, wool, yarn