An outbreak of bags!

It started with one piece of fabric that came wrapped around a birthday present, that I wanted to use as a feature (I haven’t done that yet).  Then I thought maybe some of the green fabrics could become bags. They did.

One of the green prints was a screenprinted cotton that I bought at a garage sale.  It was next to the swirly screen print in the two bags on the left below. More green scraps kept getting pulled into bags as I went. 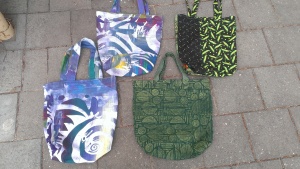 Then  the chicken print.  Too cute to leave in the cupboard, too small for a big project.  I made two bags.

Then the peace symbol print.  I have been loving it as an ironing board cover… and now it’s two bags as well.

It just seems like some kind of frenzy I get into once in a while… turning abandoned bits and bobs into useful bags that can find happy new homes.  I have now done for all of the non fusible interfacing, and all of the antique fusible interfacing… and am considering never acquiring interfacing again, although most of what I have has come without my asking for it.  So some small dent is appearing in the stash!  At least four bags already have new homes, including the one made from leftover ‘very hungry caterpillar’ fabric from a shirt or two I made… apparently it frisked out of the house so quickly there was no time for a photo…

6 responses to “An outbreak of bags!”