Once I got started on the rushes, I wanted to keep planting and there have been some breaks in the rain.  Today I noticed a leak from one of our rainwater tanks.  It was near the top, from the overflow pipe, suggesting there is water up above the overflow outlet in that tank which is struggling to escape.  That has never happened before, and is evidence of HOW MUCH RAIN we have had.  You know what I’m saying: planting time is upon us.

Here is my bike trailer load of plants bound for a bed alongside the tram stop on the nearby main road.  When I got there, there was another woman already at work cleaning up, who said she picks rubbish up there twice a week (she also cleared the paving and all manner of improvements).  She was impressed that I was doing my own planting and propagating and suggested I might want to join the adopt a station programme, which apparently provides plants.  Clearly she works up and down the pubic transport corridor, because she knew the best planted stations, where work for the dole are active and where the lavender is growing so well anyone could pick it. It was fun speaking with another close observer of these often unloved spaces.  She had noticed the reduction in rubbish and weeds from my efforts! 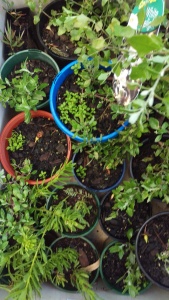 This time I had rhagodias from my generous friend (this is a sandy site where I hope they will do well), creeping boobialla that has come on strong since the cuttings went in months back; some little wattles and yet more ruby saltbush.

I put them up into the bed and climbed up after them.

There are previous plantings that look dead in these beds, but perhaps they will come back… and in among them, there were some struggling knobby club rushes and… 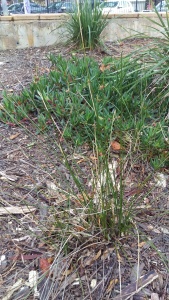 Can you tell?  In the foreground, a small patch of the Ngarrindjeri weaving rushes!

In the meantime, I finished all my grey handspun in an airport a few days back and I am now creating more so I can finish! More soon… it would be so good if this jumper could be complete before the cold weather passes! 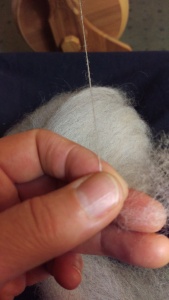