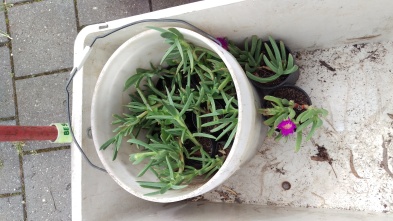 One weekend, out I went with pigface, also known as Carpobrotus glaucescens or sea fig.  It has an edible fruit which is quite delicious.  These started life as cuttings in autumn but now a couple have started to flower.  The world is wet around here, time to get them into the ground. 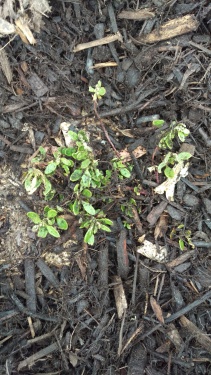 I walked up to a tram stop where I have planted a lot.  I spoke to the poisoners last time I was there and weeded to try and help them not to poison saltbush of various kinds, boobialla and wattle… One of them told me that ruby saltbush don’t absorb the poison.  How I wish that were true, but it doesn’t appear that way to me  I have had many turn black after the poisoners pass through.  When I went back recently to catch a tram I could see lots of weeds and few plants.  Some of the larger ones, rhagodias in particular, had made it and were doing well.  This time I arrived to find the whole bed deep in mulch.  The mulch was only a few days in place, and all over the plants.  Three cheers for mulch, three boos for burying the living.  I spent time excavating sedges, boobialla, correas, pigface (the large one thriving here drove my decision to plant the bed out with these highly recognisable and quickly spreading plants)… and everything else I could find.  I managed to find a few leaves sticking out and dig some plants out that way.  Others I found by accident, parting the mulch to plant other things!

In went the sea figs. Then home again, collecting a  lot of rubbish after the Royal Show and the storms of recent weeks. 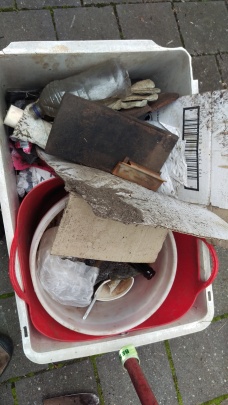 I scored some promising rusty stuff, and had a chat with a chap smoking a cigarette by the road who clearly knew what guerilla gardening was, asked me if that was what I was doing, and was generally approving and cheerful toward my project.  I put a few more plants in along the route home, and then it was time for clean up. 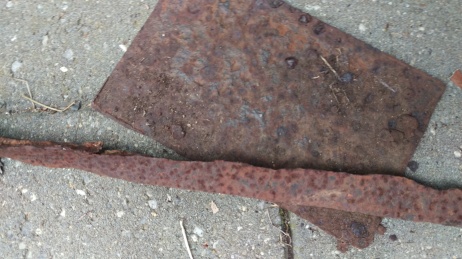