My second ‘banner’ has gone up another neighbourhood tree.  This one is my favourite E Scoparia. It was the first really promising dye eucalypt I discovered.  It used to be home to a pair of piping shrikes, who nested there in their little mud cup for many seasons.  In the last year it has acquired a nesting box and we’ve seen rosellas coming in and out of it.

This is the tree my friends and I have been mulching and weeding and we have planted in an understory of native ground covers, mostly forms of saltbush, which are now doing really well.  If you have been reading a while you will have seen this tree protected from passing Royal Show foot traffic in earlier posts here and here.  Those images show how much the groundcover project has progressed in the last 18 months or so.  In the beginning, people would remove plant guards, pull out small plants soon after we put them in or just trample young plants by accident.  Not any more.  I think the evidence of care and the success of the surviving understorey plants generates more thoughtful treatment from passersby, and it’s clear that lots of local people now understand that their neighbours are making efforts that are transforming an almost bare patch of hard earth scattered with weeds and rubbish, into something lovely.  I collected the rubbish that had landed under it this morning and maybe that is ebbing a little too.

So, four of us stood and admired this tree, delectable breakfast smoothies in hand, and tied on this little banner of admiration and appreciation. 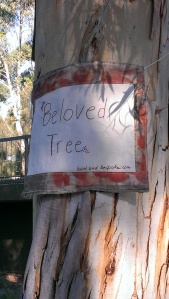 And here’s the full length picture…