A while back, my computer reached the stage in its life where I needed to go and make a cup of tea after I turned it on and before it started to be capable of doing anything other than finding its own fingers and toes. The new one is a lot smaller than the old, and needed a protective cover.

The plant dyed blanket stash came to mind yet again, and this is the rather plain and simple sleeve I made.

And a close up of my rather basic blanket stitching! I am loving the way all the plant dyed thread I’ve been gathering keeps getting put to use along with the fabric…

I’ve been working on my fabric stash for quite a while, and found I was now struggling to decide what could become bags–and my attention turned to the plant dyed woollen blanket stash. Having made quite a few larger items–the question of what to do with the small scraps arose (inevitably). And so, a very large number of needle books came into existence.

And then some more, and some more. The stash of random small quantities of string went into the mix, and eventually home made string also got used!

There came a point where I started to find I couldn’t figure out what fabric to use for boomerang bags anymore. I’ve cleared an entire selection of fabrics out of my stash. And that is when I started to turn toward the wool, and my thoughts returned to the box pouch.

I love this design. Those who have been reading for a while know that I can really get on a roll, and make the same thing over and over. This isn’t even the first time with the box pouch. They are a great size for some of my wool blanket stash, and they have also used a good number of the vintage and reclaimed zippers in my stash. And what fun to be able to use this fabric… dyed with purple carrots, passionfruit skins, eucalyptus …

But wait! There’s more (of course)…

Just quietly, that isn’t a complete catalogue… but it is a fair sampling…

Planning for a six week trip, you can bet I packed knitting, socks especially! This is the story of one pair. In the first picture, a miracle has occurred: we have one night in Montpellier, France, and instead of staying downtown we stayed a long way from town (the reasons are complex but the booking has been made in advance from Australia), right near the stadium where the FIFA women’s soccer world cup is under way and our one night is the Australia v Brazil game!! My beloved is a former soccer player, so we had to go. The French couple beside us were charming. Eventually as she high fived my beloved because Australia scored, he turned to me, and said: “so she’s the soccer loving one and you’re the one who knits?” and laughed heartily when I said “You have worked it out–but how?? I was trying to keep this a secret!”

In the picture below, I’m on the train from Montpellier, France to Milan, Italy, en route to Rome. It was a big day, livened up by being mistaken for a man in the women’s toilets in two countries, three languages, three cities. Who can say exactly why this happens–but somehow we got to Rome. These socks began as a bag of somewhat orange leftover sock yarn, left over after pairs I’ve knit over the last 10 or 15 years. Apologies for the refusal of style involved here!

The second image was taken in Rome. I’d been to the Museum of the Liberation [of Rome from occupation by Nazi Germany]. It now takes up a building that was the headquarters of the SS during the occupation. A place where leaders of the resistance were imprisoned, tortured, killed or sent away to be killed. It was both educational and harrowing. I hope that under circumstances of fascism I would be part of the resistance, and I am interested in educating myself about how resistance can be undertaken, how it succeeds, how it is responded to. I wept. As I write, I am watching a documentary about the Myall Creek massacre (of First Nations Australians by white people]. Just to be clear, resistance is not just something that only happened or happens in other countries.

So after the Museo della liberazione, I found a bakery that had a buffet lunch option. I studied Italian for four years in High School in the 1970s and 1980 (! how have I become this much older?) and all I have left, even after a tune up with an online language app, is some words and some transactional communication. I decided to brave it, and through a combination of pointing, asking as nicely as I could, expressing gratitude as best I could, and the generosity of the gentleman on the other side of the counter, I ended up with this sensational plate for a very reasonable price, including a drink and fresh bread. It was the best meal I had in Rome.

These socks have gone to a friend who has told me many times she doesn’t care about colour, just use up the odds and ends! I received her mother’s knitting stash after her Mum died and I could see what a thrifty woman she was. It is not the kind of stash people on Ravelry talk about. It was only stub ends, not even one entire ball. As you can see, these socks are in no way a regular pair. On the other hand, they sure will keep my friend’s feet warm when she is out feeding rescue donkeys these chilly mornings in her gumboots. I understand she received them with chuckling I can hear in my mind! Perfect.

I had enough cochineal dyed yarn for a second pair of socks, and in a moment where I just didn’t have time to wind more balls, I cast on.

I knit quite a bit on one of our long and lovely walks.  That is my beloved striding out ahead of me making the bridge undulate ever so slightly!

There was quite a game of yarn chicken going on at the end–for the non knitters, this is where the knitter messes with their own mind trying to outwit the ball of yarn in an effort to make it last to the end of the project.  There are just a few metres left here.  Though in all honesty, these socks are yet again not quite the same length despite my best efforts!

And now they are on their way to a friend whose last pair wore through without warning at an inconvenient moment–a report of which reached me when I was about one and a half of these socks in!  Long may her feet be cosy and her legs be strong.

Back in January, I did some fibre preparation. This beautifully deep grey alpaca was part of Joyce’s stash. My goodness, the vegetable matter and the filth! In the end, I decided I needed to flick card every handful.

That improved it a good deal and made me feel that it was unquestionably  worth the effort. And then I washed it, because it was still very dusty–otherwise I have one long “hayfever” attack for the duration I am spinning. 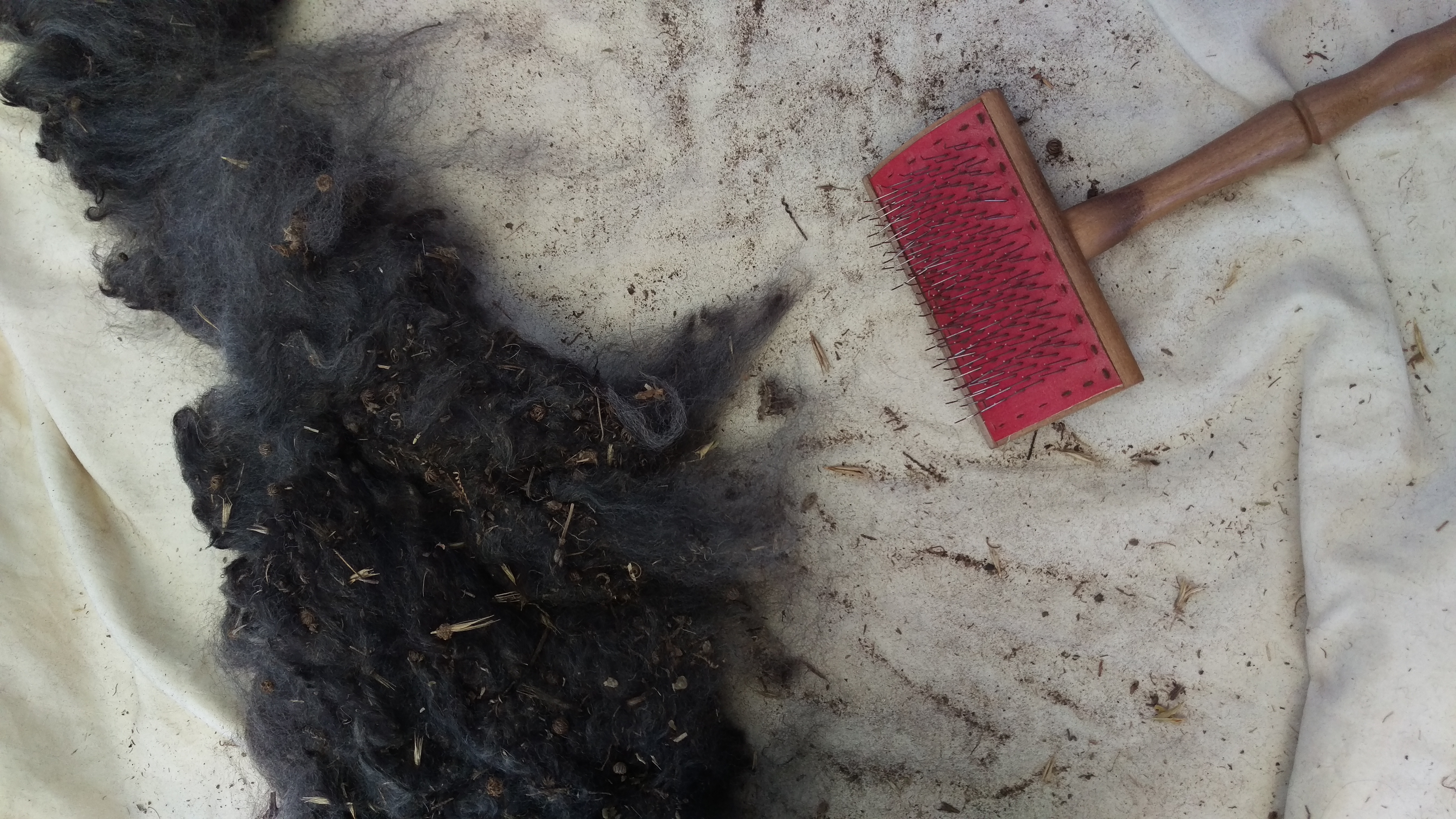 And no wonder–look at the drift of soil and seeds left behind! Here is the washed fibre, and some of the carded batts I made.

After this, I moved on to washing  part of a coloured Polwarth fleece, also from Joyce’s stash. It’s hard to make fleece washing interesting, but here is the fleece spread out on a sheet for skirting (or at least a good looking over) and some of the rather beautiful locks. They are packed away, clean and waiting for spinning…

Remember that destashed sock yarn I wrote about a while back? Well, here are the second pair… in a colourway called ‘Champlain sunset’. I admit, not my personal favourite colours.  But I have a friend I knew would love them. And for those who care, this picture shows the colours much better than the one in the last image below.

Here they are at my beloved’s parents’ home. 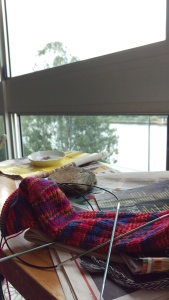 Here we are on the ferry on the Brisbane River, off to #stopadani. 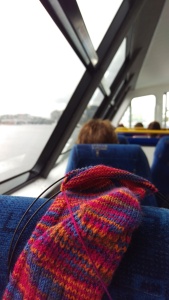 And the ferry again, outside this time.  (I am sure people take photos of their socks-in-progress on the ferry all the time).

And here they are, done!  Ouch! 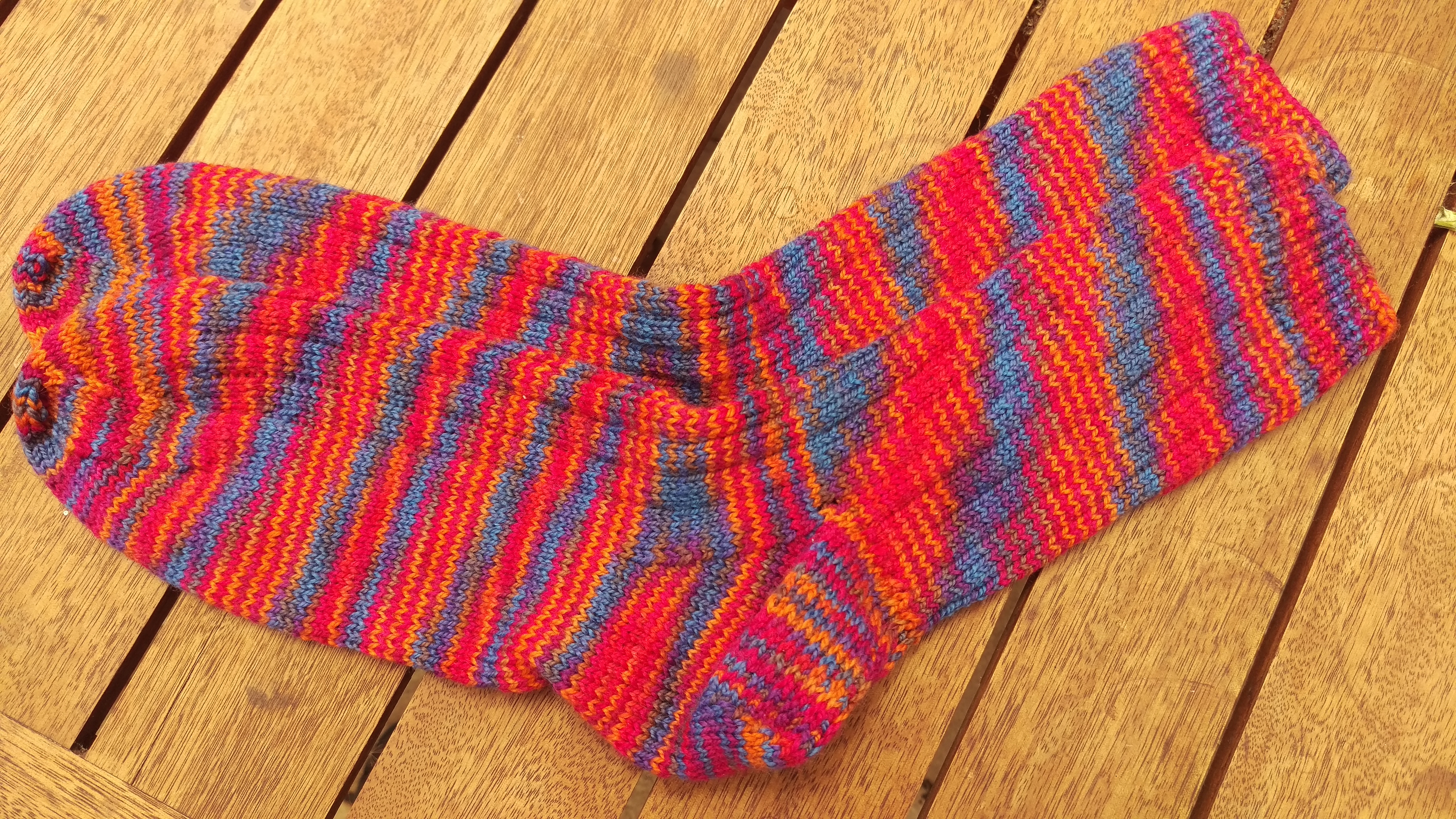 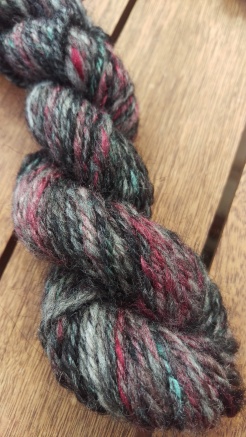 In the quiet times that did appear at home in December, there was some spinning. I found some small packs of dyed silk top from years ago and blended them with alpaca(left) and wool (right).

There was some random eucalyptus-dyed wool mis-filed. Now yarn.  And there was some spinning of natural fibres that had been previously carded. I’ve tried for a little inventory of the stash of unspun fibres and there is a lot of raw fleece in my shed, with more having arrived this week. So stand by for tales of wool being shared and fibre processing!

At some point in the #tuffsocksnaturally project, I had a point of anxiety where I just couldn’t imagine being able to spin enough sock yarn to keep up with my constant sock knitting. A person with more capacity for consistency might decide on knitting something else.  Or focusing on spinning more. I didn’t do that this time.  The future is unwritten so I’ll see how it unfolds and aim to move in a positive direction!  Instead, I decided on harm minimisation and bought some all-wool sock yarns from a destash on Ravelry. 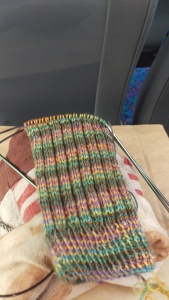 I managed to buy some undyed yarn, but while I’ve avoided yarns containing nylon, AKA plastic, I haven’t completely avoided chemical dyes.  So, there’s an ongoing project.  These socks for my beloved are shown above, on some form of public transport or another. 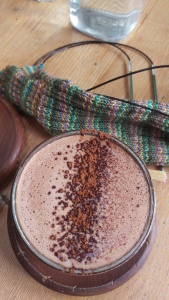 Here, having a superb hot chocolate with my daughter and a pretty serious conversation if I remember right!

On our way to a climate action protest (by train).  Sock and backpack in foreground, banner for our climate action choir in its vaguely indigo-dyed bag laid along the bench!  And here they are, done, dusted and ready for winter which feels very far away here at this time of year.

Dear and patient readers, I hope that you have been enjoying the festivals you celebrate and the holidays that you are able to arrange. I am sorry to have been absent so long–it has been a time of massive transformation at our place and other commitments have needed to take priority. I am hoping I might now be entering calmer times.  However–there has been some making going on in between things… One of my sister-out-laws was my Kris Kringle this year–in that family, there is a cap on the amount you can spend on a gift and you are responsible for a gift for just one person. It’s a very sensible arrangement that results in a small number of carefully chosen gifts, that I wish I could convince my family to take up. My sister-in-law requested a eucalyptus-dyed shawl.  What a pleasure it was to create that!

My favourite neighbourhood eucalyptus tree contributed the leaves, and the shawl is made from wool–ever the perfect match, as India Flint says. I also dyed a smaller silk and wool scarf that seemed to me perfect for a dear friend.  You can see how much more readily the wool takes up colour (left) than the silk blend (right).

This gift made it into the mail in plenty of time, which was lucky because our plans were eclipsed by events in my partner’s family that have seen us spending time in Brisbane providing all manner of care to her beloved parents rather than at home hosting my family’s end of year celebration. Needless to say there as been a little quiet sock knitting involved… 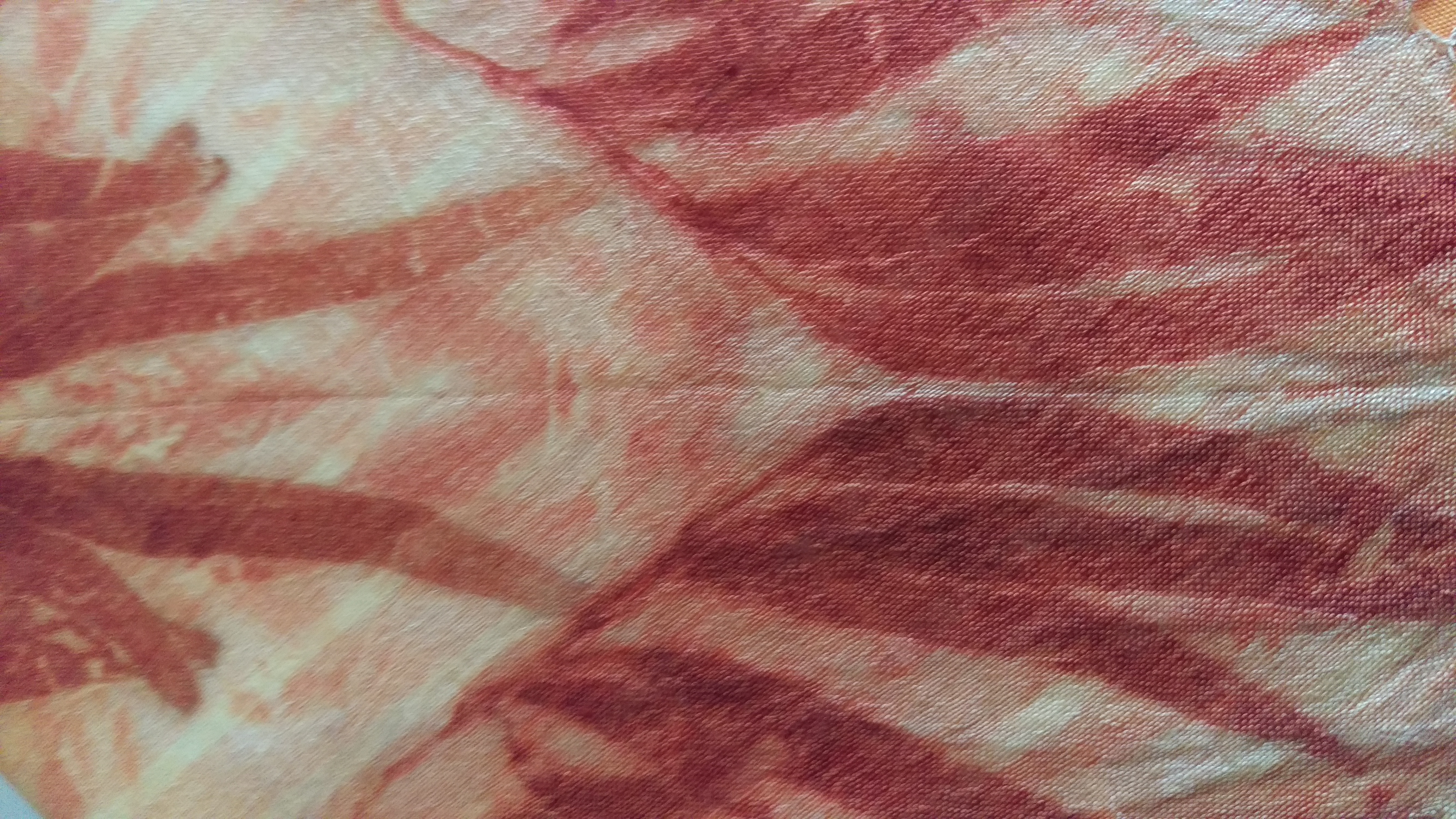