For the love of mending

My favourite bag has already been mended rather extensively, as some may remember. But it was not to be expected that would be the last time. Not only that, but it had an encounter with a Moreton Bay Fig tree which dripped sap–or perhaps some other sticky substance–on it (the black splodge you can see below).  It was very hard to get that sap out of my hair, too, and let us not speak of my shorts… But sap was only a side detail in a glorious solstice celebration my friends organised, complete with one in a series of phenomenal home made papier mache pinatas. 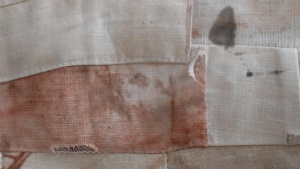 I had a few cuffs and collars from recent dye pots. They are much redder and blacker than the pieces which made the bag up until now.

Cuffs and collars often come out best of all.  Proximity to iron? Three layers give better mordant absorption and/or better capacity to get a good contact print?  All that random interfacing? Tick–all of the above? I’m not sure, but it has always been this way for me.  Anyway… it began with a hand sewn patch at the solstice event, just so the bag could travel to Melbourne next day without suffering major trauma.  Then I ripped out the lining and went for it in all the necessary places. 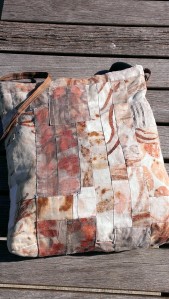 While I was on the job and pondering the unexpected benefits of interfacing, I raided my stash of intefacing of yesteryear–who knows where I inherited this pre-iron-on interfacing from? I have beena  receiving point for other people’s haberdashery for years now!  I interfaced the opening, which has worked out well in spite of my general suspicion of interfacing and the synthetics out of which most of it is made. And here is the resulting bag on a beachside bench.

I know I’ve heard the philosophical debate over whether a boat whose every plank has been replaced is still the same boat. If I’d been the philosopher in question I would have had to ask about a patched pair of jeans–the place my love of mending really took root and my skills with a sewing machine seriously began to develop–or perhaps, a bag of patches.

2 responses to “For the love of mending”