Thanks for cycling! The bunting.

There is a new segment of cycleway near our place that has been one of the upsides of living beside a major engineering project for most of the last 2 years.  It seems only right to celebrate.  The new segment isn’t terribly long, but is one of those little pieces of path that make a big difference to a cyclist.

I started out with some bike themed fabric.  It was originally intended as a shirt for a small bike loving friend… but he grew quickly into quite a large, keen cyclist and my sewing queue moves slowly sometimes.  Some of the fabric became a bag and the rest was sitting there ready to go.  I decided in the end that worrying about aligning the grain was beside the point for bunting, so relentlessly pieced leftovers together until there was just about nothing left.

Then I moved over into some purple fabric.  It dates back over fifteen years to when there was a shop nearby that sold offcuts from sheet and quilt manufacturing.  I made all kinds of things from those offcuts!  This came in one of the odd shapes that I am sure could be explained by someone who had been to the factory: a square with three squared off corners and one rounded corner.  Soon it was all triangles, some constructed from two smaller triangles.  On went the lettering.

Some more of my vintage bias binding was pressed into action, and pretty soon… 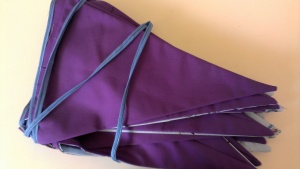 Last night a friend was visiting and she was keen on hanging it, so we had bunting hanging before dinner.

Hopefully it will cheer up weary cyclists (and energetic ones) as they pass. 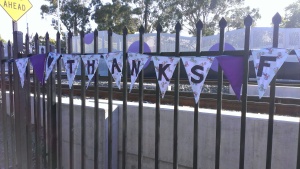 Tagged as cotton, friendship is the best form of wealth, think globally

4 responses to “Thanks for cycling! The bunting.”