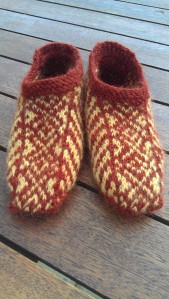 After all the three-ply colour spinning there has been around here, I started to itch to use those colours in knitting. I settled on these, the Tingvoll slippers by Kristin Spurkland. I began them before I went to Melbourne in March.  I found that knitting them over breakfast in  a cafe in Melbourne triggered a conversation every single day, and usually with another keen knitter.  It made me feel right at home, even though I was far from home and essentially, I was in the cafe because there was nothing for breakfast in the cupboard where I was staying!

Even the soles are cute. 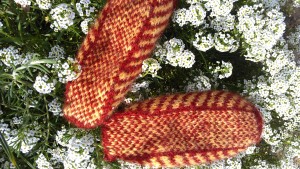 I knit these in Corriedale.  Yes, Malcolm the Corriedale.  The orange is dyed with eucalyptus, and the yellow with my mother’s coreopsis flowers.  While I was in Melbourne, I found myself frustrated by how slowly it was all going and how hard I was finding it to read the charts.  In the learning zone I was in spending my whole day at a workshop–I started to explore.  By the time I was flying home I had found that I could knit withe one colour in each hand–picking the yellow (‘European style’ as some call it here–yarn in the left hand) and throwing the orange (‘English style’, as some call it here–yarn in the right hand).  Best of both worlds!  I love that phenomenon: learning one new thing opens the doors to learning others.  Delightful. 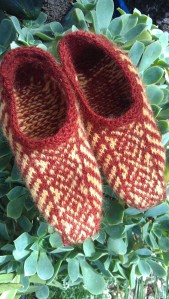 They are smaller than I had hoped, which just shows I settled on this wool and this pattern with no real thought for sizing and not much attention to the instructions.  Clearly it would be a good idea for me to quit spinning finer than I like to knit!  I think they are destined for a small child of my acquaintance.  She is a fine appreciator of hand knits.  Her Dad says when he told her I might be knitting her slippers, she was ‘beside herself!’ Apparently she likes the felted clogs I knit him so much she tries them on a lot, even though he has some of the largest feet I’ve ever knit for…

15 responses to “The unbearable cuteness of stranded colour knitting”