How not to sew knits

Last winter, I believe… I bundled up this milky merino and dyed it.  Actually, I cut and dyed two different garments, and when I stitched the first one, I found the fabric had shrunk in one direction.  I think this was the appalling realisation that led me to put this garment aside for at least a year.

One weekend a while back, I had a new sense of the possible.  If it has shrunk, waiting won’t make it grow back and I’ll just have to figure out what to do then, I thought.  I measured it against the pattern pieces.  I has indeed shrunk–but I pressed on.  I sat down to sew and that’s when I realised there was another profound sense of foreboding involved in my reluctance to start stitching this together.  Step 2 of Very Easy Vogue 9904 involves setting in an invisible zipper.  Suggesting Vogue’s idea of ‘very easy’ may have as much in common with mine as ‘the Vogue body’ has with my body shape!  I have applied a lot of zippers, albeit intermittently, but not into a knit fabric.  And not with any real pretence to invisibility.  I won’t catalogue all the things that went wrong.  I’ll just sum up by saying that sometimes a sense of foreboding is your subconscious letting you know–ahem, you don’t have the skills for this to go well!

I set the zipper in by machine the first time and it was truly appalling.  In the end, I did it again by hand.  Decent!  I won’t bore you with all the missteps–in the end I hand stitched the hems as well, and I like them too.  Perhaps I should have dyed the thread, but I quite like the luminous stitches. I used dyed thread for the zipper after all the chat in the comments and so much practice sewing with embroidery thread. 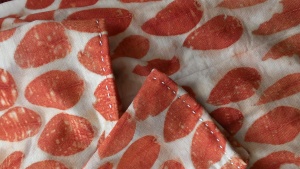 Speaking of which, right now… no wool garment story could be complete without darning.  Sigh!  I spoke to another friend who has been doing unprecedented levels of darning at her place this morning at Guild.

In fact–I needed about six darns on this garment. Without washing or wear. 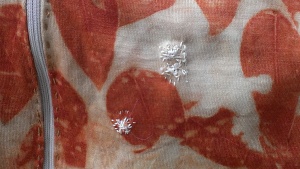 Never before have I needed to darn prior to completing a garment!  But… I like the garment.  I would prefer it hadn’t required darning!  I’d make this pattern again, and the fit might be smaller than I intended and snugglier than I prefer… but it’s decent.  Even if it ends up being an underlayer, that’s better than staying on the chair where the moths found, it, not being finished!

10 responses to “How not to sew knits”