Through winter and spring, I gathered some materials for basketry.  One fine day these iris plants were for sale at the Guild for a song.  I planted them in the garden, where they have struggled along but not actually died.  This leaves me with some uncertainty about what kind of iris they are.  I see them in various places about the neighbourhood, and there are some like these at work as well.

I decided to keep the leaves in case they might make good basketry supplies (I know varieties of iris are used in basketry), so I cut them off and deposited them in the trusty wheelbarrow where they could air and dry over a few weeks. 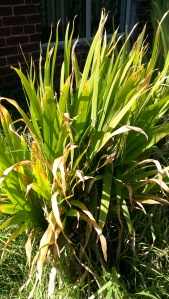 I dried them too.

On a bike ride with friends I even gathered some leaf sheaths from philodrendrons at the Town Hall!  I saw these used (and had a go at it myself) at a basketry workshop and it was too good an opportunity to miss.

Late last year, friends organised a kayak event on the Onkaparinga river, with a picnic. Here’s the river bend where we met. There were pelicans, shags (cormorants), even an egret.

I volunteered to be on the picnic team rather than the kayak team, in part because a friend who wants to learn basket making was one of the main picnic organisers.  I called and said I could bring basket makings (and a cake)–and she was keen. It had been an inspiring week for basketry because one of our lovely visitors had been making this from weeds and wool.  She has communicated her enthusiasm to at least one other friend who has made a couple more already! 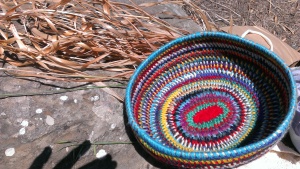 (Clearly I did not notice the silhouette of my fingers when I took the picture…) So I soaked iris leaves and Aunt Eliza and prepared them, and packed a box of necessaries so we could each move our skills forward–mine, from rudimentary to less rudimentary and hers, from zero to beginner. Here are my efforts.   I taught my friend how to make string, and then we made a start on a coiled basket, each using a different kind of leaf.

My friend took a big ball of linen yarn, a needle, her string and the start of her basket home, as well as the rest of the leaves… can you see the leaf tip sticking up from her handbag?

What a lovely day.

Tagged as Chasmanthe floribunda, friendship is the best form of wealth, Iris, string

6 responses to “Basketry plans and prospects”