These plants are the smallest form of statice I know.  It isn’t native.  I gathered the seed from a  spot where this plant is growing in fine gravel beside the tram line.  I hope if it can do that, it might manage in a spot where there is about 10 cm of mulch and earth over concrete beside a footpath.  It’s inhospitable terrain for any growing thing.  Just the same, burr medic is already volunteering to hold that earth in place, and in spite of my antipathy to burrs, I have to admire nature’s ways of getting the job done.  I am hoping that the more I plant and mulch, the less weeds will grow here and the less the council poisoner will apply his weedicide.  Now that I have spoken with him, I realise he prefers not to poison , and that he is aware I am planting out this patch.  I’ll put some bigger plants in nearby to make it easier for him to recognise these are not weeds.

This is the ‘garden bed’–you can hardly see those little plants!

On the day I put the contents of these ten pots into the ground, I realised a further 12 plants had been stolen from public land just around the corner (they even stole some of the saltbush I have planted).  Heartbreaking,  The chalked message ‘STOP STEALING OUR PLANTS: They belong to all of us’ featured in a previous post lasted only 48 hours before being painted out when other graffiti was removed.  Painted out–when a wet rag would have done the job. I was at a railway station the previous day thinking that in just over 200 years this continent has gone from being inhabited by far fewer people with land management practices which, by modern standards, were extremely low impact–to a place so thoroughly covered by roads and railway and concrete and buildings and… I don’t think I am entitled to give up because of these small losses.  Entitlement is an interesting thing to think about. So I went home and pricked out more saltbush into the empty pots. 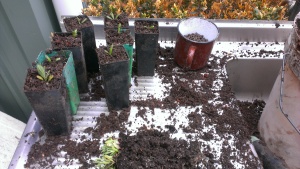 I mentioned my angsty moments to an exquisitely thoughtful friend, who offered the perspective that this was a harsh way of thinking about it.  She’s right, of course.  She told a fabulous story about one of the Australian permaculture thinkers, who planted a fruit tree as a street tree and had organised for the council to fund this.  The tree was stolen.  They planted another.  It was stolen.  they planted another.  It was stolen.  They took to just putting a tree out on the footpath, until one day it wasn’t stolen and they planted it.  He evidently told this as a success story about how to get fruit trees out into the neighbourhood!  What a great perspective. At least it makes me laugh in the face of plant theft.

I made two other sorties out into the neighbourhood in that week.  Having saltbush big enough to plant now it is raining is a great development.  There have been gains and losses.  In the gains department, someone has mulched near a beloved tree my friends and I have been building up understorey for. 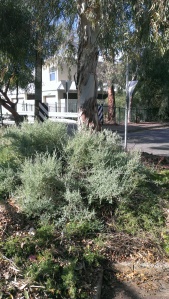 Our efforts have really paid off here despite early plant losses to dogs, dryness, vandals and accident.  The mulch looks like it might be from the council chipper.  No matter where it is from, clearly this now looks like a spot where some mulch might be helpful, where previously I made my own from street tree leaves and we wheelbarrowed in mulch council had abandoned some distance away.  Now there is decent soil under this tree and the new plants have a much better chance.  There is a wattle seedling coming up and some of the saltbush have begun to self sow.  Now that is exciting!

Over a week I believe I planted nearly 60 plants out and about.  Plants out, rubbish back in.

In one of the spots I have been planting out (beside the statice), a concrete pad has appeared.  No plants have been destroyed while this happened, but it doesn’t inspire confidence, as I have no idea what the next step will be.  So I chose a new barren spot under a bottlebrush tree and planted that out.

On the next trip I decided to plant a little triangle where a lot of bluemetal got dumped.  Some weeds managed to come up just the same, and they were poisoned by council.  That weeds could grow struck me as promising.  I pulled out the dead weeds and out came this spider, menacing me with its front legs.  I spoke reassuring words and then dug holes for the saltbush.  I have some in bigger pots (which is to say, they come with their own little patch of soil).  They will need it.  The bluemetal was deeper than I had believed and I can only hope the plants can get their roots down into the ground below.  I was heartened when my friend offered an explanation of why this might actually work–gravity and water are friends! 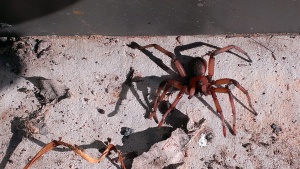 So–plants go out and poisoned weeds come home for disposal.

These pots have been in constant rotation for ages now, and it feels good.

Previously, I’ve been slower and less successful at propagating–so I feel as though my skills are a whole lot better and I’m acting on my intentions more.  In the places where it is working, having plants is creating soil as my friends and I coax these plants along and as they create something that can hold fallen leaves in place so they can be mulch and the soil can build fertility.  Thinking about how bare and sad and weedy that patch under the beloved tree was when we started and how I lost about 5 plants for every one that grew to begin with–reminds me to be hopeful.  And so do all these seedlings coming up under an established saltbush in the garden.  I thought it would be too cold for them to germinate–but maybe not.

If saltbush have a lesson to teach, perhaps it is ‘when your life’s work is to grow in harsh conditions, put down roots fast and deep, before poking your leaves out into the sunshine.’