My dear friends were the ones paying close enough attention to realise that the launch of Blankets Re-Imagined was imminent. They also were the ones with the genius and generosity to organise a wonderful supper that must have made us the envy of most of the people who were there!  So last Friday on a chilly night after a long working week we ventured out into the hills to Lobethal. The exhibition (of over 40 artists and more than 100 works) was held in the shell of the once great Onkaparinga Woollen Mills, still a very impressive building.

Some were being worn.  Others adorned walls and had been turned into all manner of art works, ranging from political commentary through multiple forms and techniques and into sheer whimsy. It was night, and indoors.  I can’t say the lighting was ideal for photography, even though I now have more understanding of white balance, due to another friend’s kindness and expertise.  So please bear with me on colour variations…

India Flint’s work is substantial in every way: created from segments of eco dyed blanket and nailed to a massive piece of kauri with nails that would make my father proud.  (He is the kind of man who would never use one nail if four nails could do the job.)  The colours and leafy shapes are glorious, and the trails of eucalyptus dyed stitching form an understated uniting tracery that seems to me to be a signature of India’s.

The variety of colour and leaf form was just lovely.

There were a whole series of blankets from this mill in awesomely seventies oranges (lime greens and purples too).  I believe we have one in our very own home.  I love the way this section references that orange but does something that is absolutely not tartanesque with it.

Here I am blending in to the artwork perfectly well in an India Flint original!  This effect gave rise to numerous comments from passersby as well as friends, and there were a few strangers who needed to feel my sleeve.  I completely understand the urge!

It was a delight to see Isobel McGarry and admire her contribution even though I failed completely to capture its colours.  Her work, ‘Oppenheimer’s Suns’ carries her trademark close stitching and conveys her grieving for all war has cost humanity and the environment. The launch happened close to Hiroshima Day and Nagasaki Day–and therefore spoke to things that had been on my mind a good deal.

This wonderful work by Sandy Elverd was on display…   she has long used blanketing as a medium to fabulous effect. 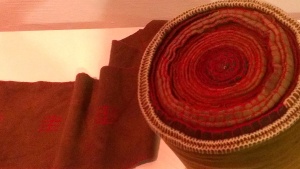 Indigo Eli contributed a piece commenting on the Australian government’s recent Border Protection Act and its silencing of criticism of the treatment of asylum seekers.

There was plenty of whimsy… these by Victoria Pitcher.

This echidna by Lindi Harris and Lisa Friebe.

Then there was the blanket cubby.

Unfortunately I did not record the name of the artist. 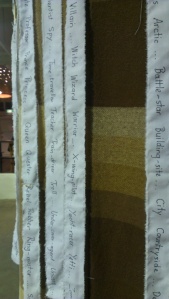 There were also reminders of the machinery on which so much wool was processed into fabric. 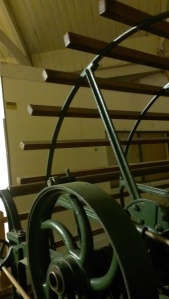 And there was the building itself to admire.

Adorned for the event rather wonderfully. 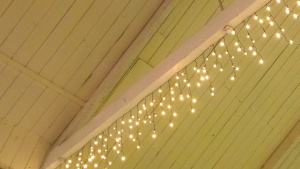 Such a wonderful evening. So much to think about and wonder over, admire and revel in. And such glorious company to do it in.