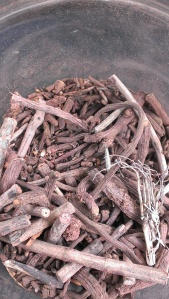 It all began some time ago with wool/silk yarn and some madder dyeing.  There was madder root of antiquity.  I soaked it overnight first.  And tried to follow Jenny Dean’s wisdom. 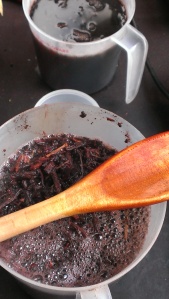 It all looked good to me.  Eventually I added wool to the vat to exhaust the dye, and got apricot shades on the wool. 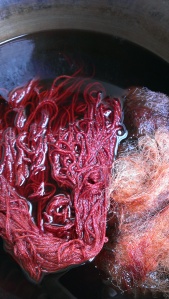 The yarn came out rather nicely.  So then I was looking for a pattern that might be suitable.  Somehow I slipped a gear and thought I might not just knit the sock that lives in my head. 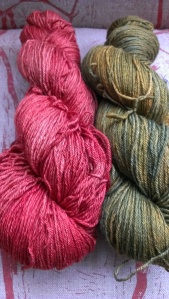 I cast on, on the bus to work one morning. 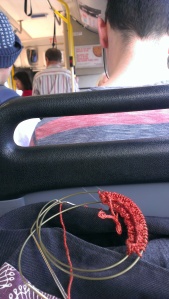 Here we are preparing for class and waiting for lunch. 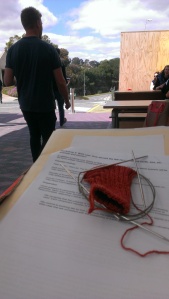 Here we are at a break in a conference, admiring kangaroo paw.  I knit the heel three times at the conference because apparently I can’t be trusted to read a pattern.  The first time I knit as the pattern required, and then had a failure of understanding, so I ripped back, re-knit and then realised what I had missed on the first pass, and followed the pattern again!  That slowed me down.  I am prepared to knit in a conference but not to rip back and pick up live stitches!  I had to do that in breaks. 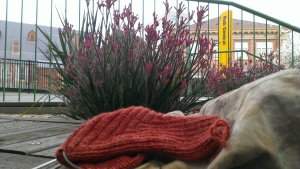 Here I am on my way to a formal occasion, wearing a frock and knitting at the tram stop.  I thought perhaps the rare occasion of me in public in a frock should be recorded for posterity. 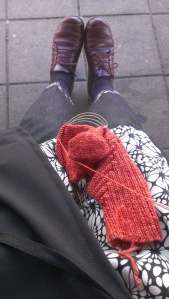 Nearing the final moment… just prior to the grafting of toes… 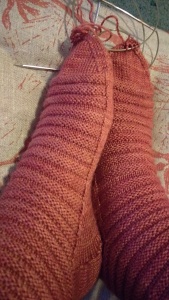 And here is a less than wonderful mood lighting photo of the socks on their rather wonderful intended recipient, at last!  The pattern  is Treppenviertel by Nicola Susen.  It is a rather lovely ode to the ‘stairs district’ of Hamburg.  As promised, I managed to pick up the pattern after a while, rather than needing to count every row–and this is just what a public transport knitter needs!  Three cheers for frieds, socks, and public transport. 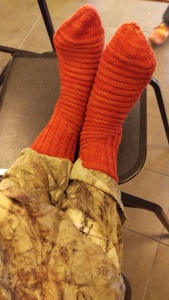