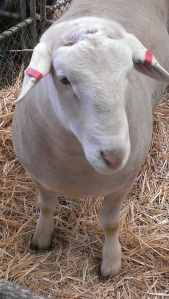 Speaking of spinning my own sock yarn, let me introduce my wool.  While I was at the Show last year, I checked in with the Suffolks.  They were the featured breed for 2015. 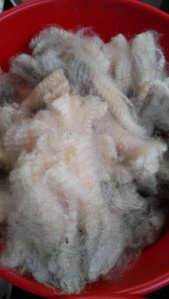 As it happens, I bought a kilo of suffolk at the Guild when there was an opportunity a while ago.  I came home keen to wash fleece somehow.  I try not to resist that inclination no matter how daft, because it doesn’t happen often.  This time it was pretty daft–I finished after dark and could only hope the fibre would be clean in the morning. 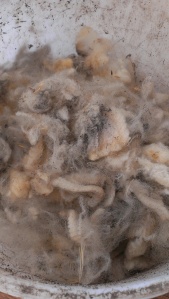 I don’t think the fleece was skirted… so there was some serious loss, not to mention burrs, wattle seed (that is a new one!) and feathers (that was new too).

Meanwhile, I had a helper.  She has since left us for a new life in Tasmania, but she was so interested in knitting!  A shame really.  I cut out a pattern and she chewed on the paper.  Ooops.  And here she is sorting out an apron string! 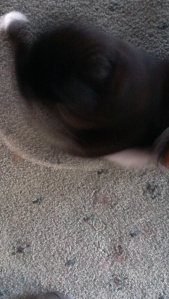 You just can’t be too careful with an apron string when it is hanging provocatively off the side of a chair. 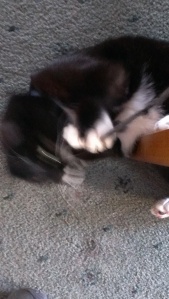 5 responses to “Suffolk for socks”