There is a very large patch of dyers’ chamomile beside the Torrens River in a public park in the city.  I was going that way recently and decided I would deadhead the chamomile.  So I packed my secateurs and bags when I was headed that way again (en route to a day at WOMAD with friends) and took a detour. The summer has not been kind to this patch and some of it has turned black.  But there is so much of it, there was no way I could cut all the dead flowers.

I had a lot of company.  Regular ducks and maned wood ducks and a coot and a top knot pigeon and some moor hens came to chat.  Most departed when I didn’t offer any morning tea.

This young one was persistent, chatting on to me as I worked away.  Eventually quite a few of its relatives came along to make sure everything was OK and watch carefully from the other side of the path. 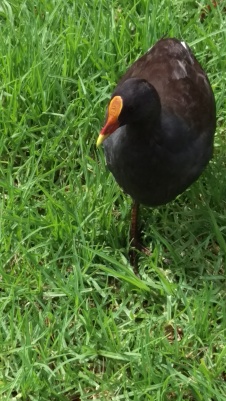 I kept snipping out dead flowers as passersby stared or ignored me or hurried past in case my strangeness was contagious, and maintained a bit of a conversation with the young moorhen. Next day I had this to set out to dry in the heat.

I can feel future dye baths coming on.  It has been a great summer of harvest.  We have had so many cucumbers!

The rhubarb kept coming even though the summer has been hard on it.

I have been out in the neighbourhood collecting saltbush seed.

I even found a new kind of saltbush that the council has planted a little way away from my house.

Friends had an open garden where they sold plants for an excellent cause.  I donated my collection of divided succulents, and they all sold.

In March, we continued to enjoy local strawberries and bought the big box of seconds for the sheer delight of them. 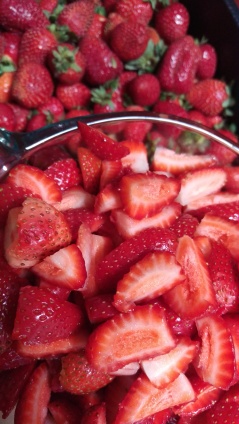 And now autumn has begun, the quince harvest has come in too, lest the possums eat them all… and the new season’s harvest is begun already.

Tagged as dinner, dyers' chamomile, friendship is the best form of wealth, saltbush