Just mend it: Getting started

In preparation for the upcoming mending workshops, I’ve created a directory of mending tutorials.  I’ve also been beetling away creating mending kits. Friends have been handing over their spare unwanted haberdashery and tins.  I have raided local op shops.  At one of them I was offered a motherlode of  unwanted notions that were seeking a new home. Here’s a partial view. 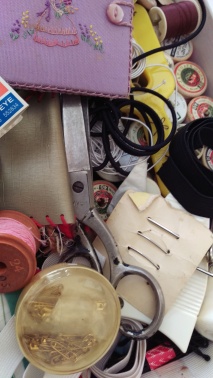 Such treasures.  Including a lifetime’s collection of travelling mending kits from hotels and airlines the like of which I have never seen.  Now, it is going to new homes. I’ve even sewed little covers for thread snips from lino samples I seem to somehow have acquired. 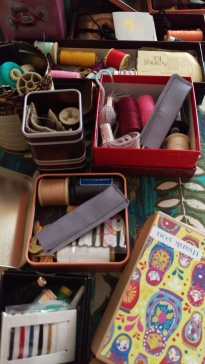 There are pincushions and measuring tapes, thimbles and safety pins and many reels of thread.  Amazing collections of needles, pins and such.

The creation of the needle case gallery has been ongoing. Scraps of fabric with a lovely button and all manner of little bits of ribbon, string and cord I have saved for a special occasion (or just a use) have been converted into needle books. 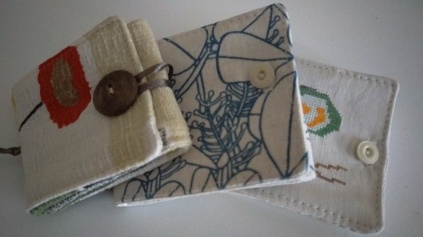 Lovely little bits of hand embroidery on fabric that has gone well past original use, now adorn a few.  Beautiful Australian print remnants have been  turned to use too.  Some have buttonholes and some have loop closures. Some are plant dyed and some are tied with cord too short to form a drawstring on a bag.

I am very fond of my own needle case, so eventually I made some just like it.  Well, sort of like it. We started here (mine on the left, and pieces of dyed blanket on the right). 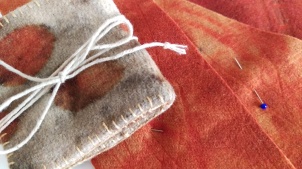 Eventually, there were about eight.  I stitched at triathlons and in front of the TV and on the train.  I finished some with fancy buttons, beads or little bells saved from Easter bunnies.  I tied some with cotton string that has also seen the dye bath, and others with some hand twined silk string, with a thankyou to India Flint for allowing me to see this was possible and that string was not only to be made from plants.  I was thinking about the fact that I had saved all these improbable things, while others had been handed on to me by relatives and friends with similar habits–

It brought to mind my mother’s parents, two people who lived in poverty their entire lives, scaling up to indoor plumbing and heated water during my lifetime.  My grandfather left countless pieces of recycled string, pre-loved screws and straightened out nails when he died. My grandmother had a drawer where special treasures lived that I was allowed to admire as a child.   There was a special safety pin in there she used to pierce a hole in the filter of her rare cigarettes for some supposed health reason.  There was also a little black cat made of plastic.  I knew it had come from a box of Black Magic chocolates.  I had seen the boxes for sale but never had any.  Like her, I thought this little creature was a treasure worth saving when the cardboard box and the rather amazing papers surrounding each chocolate might have passed on.

My life is utterly unlike Millie’s.  But it is good to have things in common with her. It warms me to carry these memories of her along and hold them in my mind as I craft these little books for future menders who will share some fraction of the skills she had.

15 responses to “Just mend it: Getting started”