The winter festival of mending continues!

I am in a little band, or perhaps it is an ensemble. It’s modest, and it is unlikely to ever achieve fame.  But we do rehearse.  At one rehearsal the drummer asked me if she could bring me in some knitted things that needed mending to look at.  Maybe it was my knitting in periods of waiting that made her ask.  The long backstage wait before our one significant gig to date, fro example.  I had my sock along, as you might well expect if you have been to this blog before! 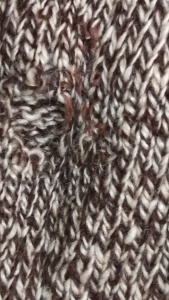 It’s my usual practice to offer to teach people to mend rather than mending things for them without debate.  But she is just so charming.  She brought her two garments in the following week and I took them home.  The first is a cardigan which looks to me like a hand spun and hand knit treasure made of relatively coarse wool by contemporary Australian standards.  It had already had some mending (above) in a couple of places, and had those signs of long wear–a cuff and hem where the entire edge is on the verge of giving way.  I wonder if the drummer knows the knitter and/or spinner? [When I returned the mended item she told me her grandmother had made it but she wasn’t sure whether her grandmother had spun the wool]. 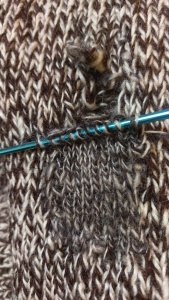 The biggest holes were in the elbows.  Generously sized and sporting some long ladders in both directions.  Happily, the ladders are easy to fix with a crochet hook, so I picked them up, stabilised the edges of the holes and set about knitting up some patches.

Remarkably, I had some matching wool–same colours, handspun and marled.  But not the same gauge.  She had said she was up for a visible mend, so I just went ahead and knit some patches in. 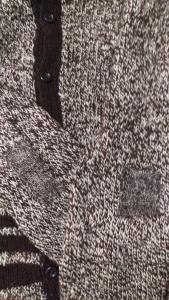 She will now be able to wear her cardigan again, just as she said she wanted.  Next, a merino jumper.  It’s a style that is readily recognisable but a little bit complicated to match.  The complex nature of the machine knit had limited the size of the holes, so I tried for a woven mend in something pale enough not to yell out. 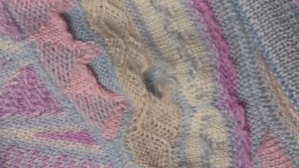 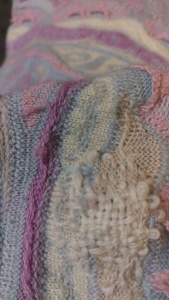 And lest you think I’m only mending away from home, followed up the next week by darns to the elbows of one of my beloved’s possum wool jackets. 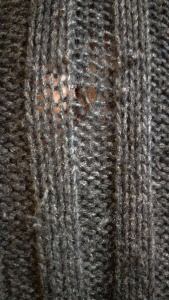 These darns show a bit, but not nearly as much as her shirts were showing underneath through what remained of the elbows!

Tagged as friendship is the best form of wealth, think globally, wool

9 responses to “The winter festival of mending continues!”