I finally decided to plant out the Eucalyptus Scoparia I manged to grow from seed.  I have been planting out an area near the railway line for some time now and it has gone from bare and weedy to bushy and well covered. There is plenty of protection for a tiny tree now!

I planted some more ground covers and was surprised to find that the seafoam statice that had been doing so well there had vanished, with some holes left behind.  I hope it has been dug out and replanted somewhere where it was wanted.

The E Scoparia went in behind a bench where I’m hoping it will be safe to grow.

Later in the day I headed over to a new place I have been thinking over.  It is a barren space adjoining the railway station in my neighbourhood, with an open drainage route running through it.  I have been wondering whether the rushes might grow in the drainage channel, which is quite mossy in places at this time of year. I thought I’d start with the sides of the space though.

I took over some native pigface (Carprobutus glaucescens) which has grown readily from cuttings, some saltbush, a hop bush and a eucalypt (unknown species). 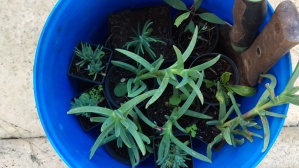 In they went.  There was some soil here and a lot of sandy unpromising material as well. 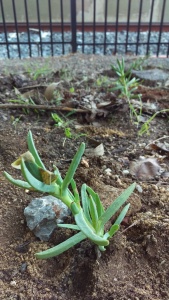 And, there was so much broken glass.  It looks to me as though someone/s must have had fun smashing bottles against the bridge walls here at some point.  So I collected all I could.

I took my haul of rubbish home and tucked the rusty wire into my iron water jar for later use in dyeing.