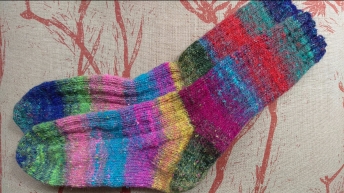 I posted a picture of these socks while in progress on Instagram and a friend said that the word “lurid” came to mind.  Well, yes!  Nothing naturally dyed going on here.  She also asked if they were a statement on the times–for those outside Australia, our nation is currently debating whether the law should be changed so that people of the same sex can marry.  And despite the well-established reality that more than half the nation supports this change (as established by opinion polls) we are having an expensive but non-binding postal survey on the matter at the moment.  It has been a time of some very heart warming moments but also some thoroughly unpleasant public debate.

I admit, I had not been thinking of that when I cast on.  But–really–my friend was right on both counts.  These socks are going to live with a friend whose favourite colour is lurid (bonus points for neon or dinosaur prints), who has been in a same sex relationship for over 20 years.  She isn’t enthusiastic about marriage, in the way that those of us who spend a lot of time thinking about the history of women’s rights, domestic violence and such like often aren’t.  Of course, we know people who have wonderful marriages.   But we’ve seen a lot of the ways that marriage can go wrong, and that sure makes marriage  as an institution less romantic.  We remember its role in treating women as property and limiting women’s rights to bodily autonomy, working rights, equal pay, voting rights, engagement in the economy and so much more.

However–right here right now, for many people who support same sex marriage this is really a debate about whether everyone should have the same legal rights.  That’s a very easy question to my mind.

Meantime, the socks are packaged up with laundry requirements and darning thread and ready to go to their new home.  I cannot control the national debate, but I can show the love to y near and dear and keep people’s toes warm in their gumboots, shoes and boots! 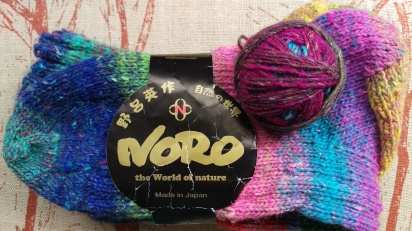 Tagged as friendship is the best form of wealth, gifts, socks