The Guerilla Gardening Goes On 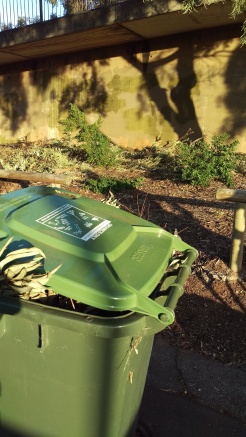 There have been several forays out into the neighbourhood lately.  I’ve planted cistus (rock rose) after my first season of successful propagation, as well as some of the regulars, carprobutus (pigface), boobialla and so on.  My beloved and I also made a special trip to deal with a lot of tree branches that had been cut ow torn off and thrown into one patch, on top of living plants.  Some from the trees in the patch and others perhaps from further away.  We filled our own green waste bin to capacity (the council collects this and it goes to commercial composting) and then cut up what was left and distributed it as mulch.  At one stage while we were chopping up dead branches, a gentleman I often see walking his dog when I’m out and about stopped and said this was the Council’s job.  We had a chat about how Keeping Australia Beautiful was everyone’s job (this was the theme of an anti littering campaign we clearly all remembered).  In this final image, a place where the council has planted and even paid a watering system, and nothing has been growing on the front edge of the patch except weeds for over a year.  Now, groundcovers.  That’s better!

2 responses to “The Guerilla Gardening Goes On”