This post is part of the Tuff Socks Naturally project, an open, collaborative project exploring more sustainable alternatives to superwash and nylon in sock yarn. You can join in on the discussion, share pics and projects on this blog or the glorious Needle and Spindle or on instagram using the hashtag #tuffsocksnaturally.  If the project is interesting to you, there is some most interesting discussion going on in Mrs M’s Curiosity Cabinet podcast.  She has a similar though completely parallel project going on, mostly using yarns from the UK (she is in London).

The conundrum being faced in this post: how to create socks that will work for a wearer who has delicate skin, who refuses synthetic dyes as well as superwash treatments and unnatural fibres, and who walks long distances.  A perfect recipient for the fruits of the tuffsocksnaturally project!  I came up with a new idea about how to respond–why not make the foot of the sock, the business part where most of the wear happens and where the calluses are thickest–from a different yarn than the leg–where the itch and irritation factor might be more critical? 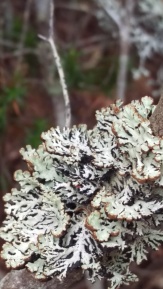 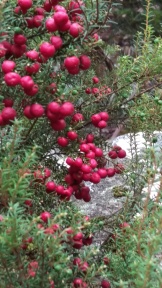 This pair of socks began with a skein of merino and silk commercially spun yarn, dyed in a fructose indigo vat at my place. You can see it in that top picture, with a view over Hobart because I went there for a conference on climate change [the irony].  I cast on and knit through session after session.  I had never been to Tasmania before, so I admired the lichens and barks, berries and docks and buildings. 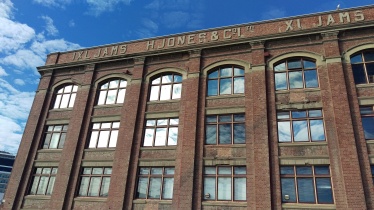 I ran all round the harbour front before sessions and eventually reached one of the places from which the forests of Tasmania are being exported to the world, something many Australians have spent time and trouble seeking to slow down or stop.  Deforestation is contributing to climate change and species extinction just for a start.

I knit and I knit. And we did get to go see some of Tasmania’s beauty as well as its biggest city (which is lovely, as a city). 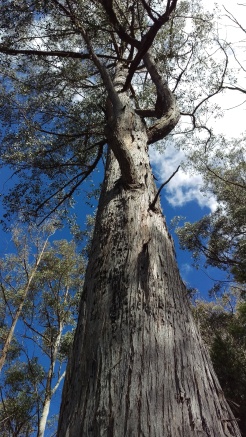 Shortly, I had two sock legs!

The trip to Tasmania came just after my Kris Kringle steel lunch box arrived (‘Kris Kringle’: a Christmas gift with a limited cost, with just one gift for each person to buy and to receive, in the entire extended family).  So I had some great lunches, raising my level of lunch preparation to meet my new leak-proof lunch box–here, cold rolls in rice paper wrappers with Tasmanian blueberries! I don’t usually run to photos of food, but this lunch clearly made me proud. 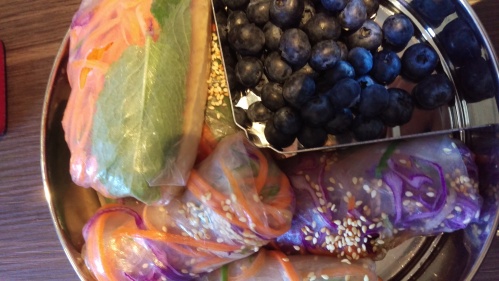 All in good time, I moved onto the feet of my socks.  Hand spun Suffolk from Malcolm’s Kangaroo Island flock.  True three ply yarn. Here I am spinning at Guild.

I stop here to note reservations and things learned, or at least contemplated.  These yarns are entirely dissimilar.  The Merino + silk could hardly be softer.  The Suffolk  could certainly be coarser, but the contrast is considerable.  The grist is different.  The hand is different too: the Suffolk is pleasingly bouncy and springy, the Merino is quite drapey.  The gauge is different: the Suffolk is a good bit thicker than the merino.  That might help with wear–there are just more fibres to wear through!  But this does rather assume that they will get into my friend’s favourite boots.  Time will tell.  They are a bit, well, Frankensock.

And, I thought this was a high twist yarn when I was spinning it, but last night I read a comment on Ravelry where someone had done a sock spinning workshop and the instructor made the whole class put the yarn through their wheels twice when plying.  As I knit the feet of these socks, I decided it wasn’t that tightly plied.  Next time I will either try the high speed head for my wheel for the first time, or ply twice,  because–knowing that high twist is desirable, and intending to create high ply twist, are not actually the same thing as succeeding.  No amount of theoretical knowledge or defensively thinking “I know that!” will make these socks wear better.  For that, I need actual high twist and–I am not sure I have it yet.  If I don’t have the patience to create it with the whorl I have been using, maybe it is time to try the high speed head and see what happens.   Leaving it in the cupboard probably won’t do the job.

Second sock being knit during a workshop on Slow Fashion at Womadelaide 2018 (hilarious for me, but no one else noticed as far as I could tell).  I’d call this slow clothing more than slow fashion. 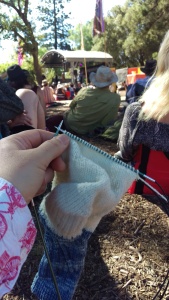 Knitting down the foot toward the toe, at a Womadelaide concert.  I was sitting with a dear friend who sprinted off suddenly mid song.  I thought he had sighted a long lost buddy in the distance but actually he had seen the line for CD signing for a band that had made him weep the previous day dwindling to two people and had sprinted off to buy me a birthday gift!  In terms of sock engineering, I knit the foot at a firm gauge, and I ran the heel reinforcing stitch up into the blue leg of the sock for a bit of extra reinforcement.  This time I decided the feet were thick enough and did not use reinforcing thread. 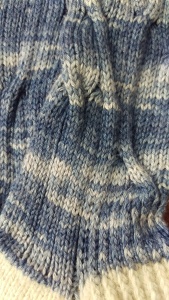 And there you have it. Frankentuffsocks!