As so often happens in my case, one project leads to the next.  The scraps left from converting unwanted trousers into bags were the biggest scraps sitting on the small scraps pile when I felt the pull to make “beloved tree” banners.  I decided that this might be a fun Womadelaide project–there I would be over a long weekend, sitting under beautiful trees listening to music.  What could be better? It was going to be way too hot for substantial knitting projects.  I decided if I took needle, thread and some calico or sheet offcuts–that would be a good start, and that is how I began.   Before I went on day 2 I made some “frames”.

You can see how this goes.  It’s simple but it gives a sense of framing the words that I like.  It somehow draws in the idea of that-which-is-framed being important, precious in some way.

And there I sat–I have inherited a small embroidery hoop.  I usually don’t use one, but it seemed like it might help and it caused several conversations with smaller people interested in the whys and mechanics of things, which were also fun. 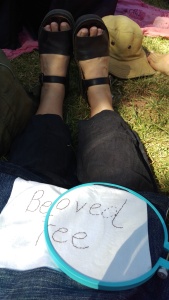 Afterward, I found more calico/scraps/leftover bits of ancient sheets or tablecloths and stitched them on to create a backing and a neat edge around the frame. 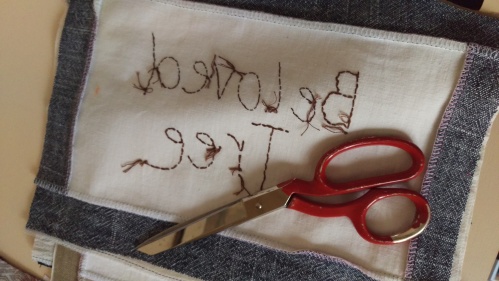 There are six in all, some with linen frames.

Some framed with offcuts of denim jeans that have passed into new incarnations as bags. And now they are ready to be applied to trees.  I do feel as though a tree needs no adornment.  However, I feel all too conscious that trees are not universally beloved.  After the last big storm in which trees came down on cars and the tram line in our neighbourhood, I put up two earlier banners, and one was removed almost immediately.  I don’t know whether it was souvenir-ed or whether it was taken down by someone who didn’t accept the message.  But I do know that at such times trees around me face higher degrees of threat, and this is one thing I can do.  Maybe this weekend of earth hour is the time for some to go out into the world?