Fermentation Indigo Vat… not this time…

On the first day of the new year, I started up a fermentation indigo vat, following Rebecca Burgess’ recipe in Harvesting Color.  I’d had the ingredients waiting for some time but finally decided to gather my courage and give it a try.  I have previously used the hydrosulphite vat with success, but this was my first time trying a fermentation method.  I thought setting this vat up in the heat of an Australian summer was a good application of the principle that you should do those processes which work with the seasons and not against them.

Well.  Here it is, May and the vat never became active in summer and won’t now that winter is on its way.  So the other week my friend wanted to indigo dye a birthday surprise item, and what with the need for it to be a surprise, the difficulty of laying in hydrosulphite and the volume of other things to do, by the time we got the vat happening, it was after dark.  What I am saying is, these pictures are not great!

We used about half of my fermentation dye bath and added hydrosulphite. With the help of a nice woollen blanket (sold to me as a dog blanket due to what must have been a vey sad felting episode in its previous home) for insulation, and of course big red protective gloves… we got started and had that indigo magic in spite of the months the vat has lain untended.  In goes the white fabric… 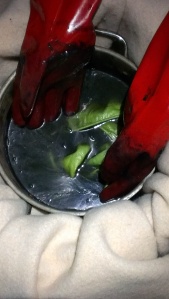 Exposure to the air on the clothesline 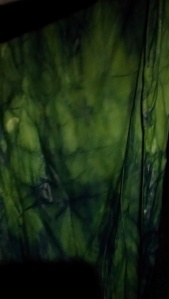 After a good rinse! 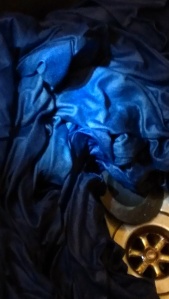 Next summer, I can see I’ll have to do better to get fermentation happening.  Better focus, more effort at maintaining temperature, and perhaps some feeding and maintenance.

For those who have been worried, our caterpillars have apparently changed into moths and moved on, and the madder is recovering. 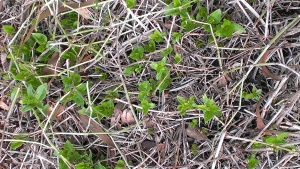 2 responses to “Fermentation Indigo Vat… not this time…”