Last year, three t shirts from the op shop (thrift store) found their way into my soymilk bucket.  They have been sitting in a little pile since then, but recently they made their way into the dye pot. This one is for a treasured friend who has been waiting a while since I checked size with him.  The first picture (of the front) gets the colour about right and the second one (further below) is inexplicably different though taken within minutes!

The leaves are from another friend’s Eucalyptus Cinerea.  It needs trimming to keep it out of the hair and eyes of passersby and I have generously offered to help! 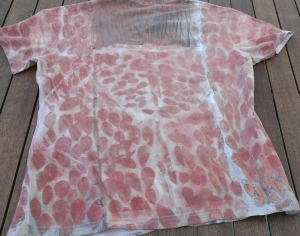 Yet another friend (perhaps I should ask my dear friends if they are happy to be named online!) visited on dyeing day so I gave her this next one and she designed its new leafy incarnation.  On the day I am writing I brought it in to work still bundled and tied with string, and she opened it on her office desk over lunch.  We experimented with putting these garments in a dyebath, rather than just into a simmering pot of water, and that is the reason for the overall orange that is strongest up near the neckline on the back where the fabric absorbed the dyebath most strongly.

I think her design is lovely… 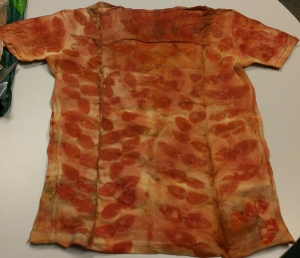 The third t-shirt was a pale grey one.  I bundled it up in the morning and gifted it, cooked, but still rolled and tied, to a friend who is completely enchanted by the eco-print process and who has been facing tough times lately.  I’m hoping unwrapping that bundle gladdened her heart in these challenging times. It sure gladdened my heart to have her visiting us.

While we’re talking t-shirts… I couldn’t help noticing that two of the three were made in Bangladesh, a mighty long way from Adelaide.  For anyone interested in viewing the global garment trade from the perspective of a single t-shirt (though not one of these leafy t-shirts!) Planet Money from US National Public Radio has made a series on the subject you might like to check out.

Hopefully that’s three op shop t-shirts that will now have much more exciting second lives, with much less travel involved!