And then I spun some newspaper into yarn and knit a hedgehog.

Apparently, just because I could.  Some time ago I found this link and bookmarked it.  One day this week I went to Green UpGrader again and suddenly I just had to do it.  Soon I went from an ordinary issue of The Guardian to this:

And after a couple of evenings of rustly spinning, this: 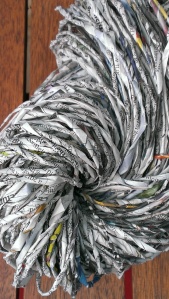 I am surprised how much I like it. I may have to do it again.  There was some crocking (dye rubbing off), but since I didn’t dye this, I didn’t feel bad about it either!

Then last night, after a very random but charming conversation on Ravelry where I offered to take suggestions about what to knit with my cassette tape yarn…(cassette tape core spun over natural grey wool or eucalyptus dyed merino)…

The pattern is Knit Hedgehogs by Purl Soho.  Friends came over late in the evening to sleep over, go to the airport and leave their dog with us while they are in Melbourne.  There was a lot of hilarity, beginning with ‘What are you doing?!’  Then there were suggestions as to whether it looked like an echidna (or a puffer fish), whether my embroidery improved the likeness (or not), whether it was cute (or suspicious)… Then  there was consultation of the interwebs about whether hedgehogs have ears or tails.  We don’t have hedgehogs in this country and we had to reference Wind in the Willows or Beatrix Potter or some such anglophile literature we’d been exposed to as children for any information about hedgehogs we ever had.  So then there were many showings of cute hedgehogs from the interwebs. I’m not sure what the dog made of it.

In short, I still have a lot of cassette tape yarn left!!

19 responses to “And then I spun some newspaper into yarn and knit a hedgehog.”