A while back I had used almost every bobbin I own, each with a different colour of thread on it. 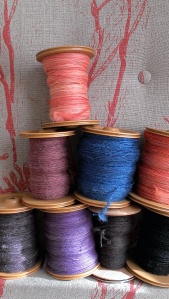 Over time there were even more bobbins of singles than this pictures shows…  finally there has been a season of plying, skeining and washing, and now I have this pile instead.

Logwood purples, purple-greys and purple-browns, a cochineal pink (and a cochineal-logwood exhaust), three indigo blues, two madder exhaust-oranges, and a coreopsis exhaust yellow.  I didn’t take good enough notes of the fibres–some are on merino roving (the madder), some on polwarth, some on grey corriedale. Maybe there is a little of Malcolm the Corriedale in there too!

And there has been even more bee swarm action in the neighbourhood.  These bees have taken up residence on a rainwater tank, with some support from a ladder! And… I am so over tending the silkworms 🙂