On the delights and satisfactions of mending

I like mending.  I find it satisfying to have the skills to be able to render something useable when it is in danger of becoming unusable.  I like being able to give something lovely, or simply beloved, a long life rather than accepting that it will have a short one. 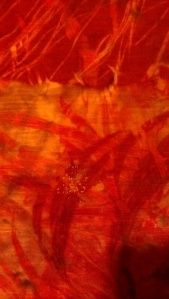 I learned to use a sewing machine primarily in order to be able to mend things, jeans especially, and I am still doing this by machine as well as by hand. 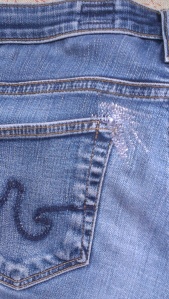 I do think it is a privilege to be able to take pleasure in mending.  I have choices about whether to mend or darn.  I can afford to buy new things rather than mend them, and this is a privilege that has not been available to most of humanity for most of history.  It’s privilege most people don’t have now.

I have noticed that I mend sometimes because the thought of shopping for another something is very unappealing.  I love the idea of shopping for books, but clothing, not so much.  If I like a garment, I like to keep using it.  This is my favourite [black] turtleneck for work.  It sprung a couple of small holes this winter and I have stitched patches on the inside of the arm and the front to prolong its life of keeping me warm and unremarkable in work contexts.

I hope it might make its way through more winters as a result of this patch and the one below.  These patches were so successful I also mended another skivvy that I like much less and that has descended into gardening and being an under layer.  I don’t even like it much.  But it’s warm and serviceable and somehow that was enough. 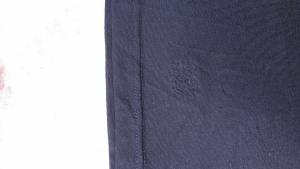 Occasionally I branch out. I restitched a spot on my shoes that was coming undone and threatening the structure of the back of the shoe this winter because I couldn’t see my way to getting it to a shoe repairer now the one nearby has closed down, and I thought I should be able to do it myself.

We use wheat bags in place of hot water bottles, and they sprang leaks, shedding a few grains of wheat here and there, this winter.  I mended them using a stitch I learned as a girl guide, for mending tents–and then mended a new leak and another one.  That sense of history and skills passed on is part of what I enjoy in mending. Years ago, I decided to be one of the keepers of darning for future generations, and I have taught a lot of people how to darn since my mother taught me.  But in the end, I recovered the wheat bags to see if I could, and of course, I could.  Instead of corduroy I now have a wonderful print on hemp left over from having our chairs re-upholstered and an eco print on pre-loved linen.

I enjoyed being able to extend the life of these jeans for my beloved, even though I could see it would be temporary–and not a very long temporary at that.  I have tended to the favourite clothes of many of my friends and some of my relatives over time.

I have been having a thought experiment about what it would mean if I never bought a piece of new clothing ever again.  Some of the mending recently has been driven by this thought experiment lurking in the back of my mind this very dry winter.  In previous times when I asked myself if I could never buy a piece of new clothing again, I was often thinking of it as a challenge to my skills as a maker, and as a way of contributing less to the exploitation of people who make clothes under awful conditions in parts of the world with little protection for workers’ health or industrial rights.

More and more, I am thinking of it as a response to the need to consume less in order to reduce my carbon footprint in the face of climate change.  When I think of Naomi Klein’s book This Changes Everything: Capitalism vs the Climate, I find myself thinking about the idea that we could keep climate change to a degree which might be consistent with a liveable future for the planet if we returned to the degree of consumption of the 1970s and if everyone was part of the effort.  She points to the mobilisations that supported the war effort (here in Australia, we hear and see most about the mobilisation here and in England) as an example of a time in which the entire society was organised with a relatively common goal and a sense that everyone was part of it and that any privation on the home front should be shared in a relatively just way.  Let us concede before going further, as I am sure Naomi Klein would, that here is nothing just about war and no way of justly sharing the many forms of suffering it creates.  A just sharing of the costs of responding to climate change is utterly crucial–and unlikely to happen without a huge movement of people from everywhere demanding exactly this. 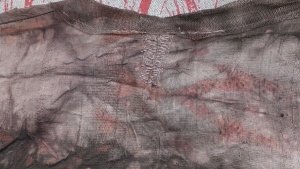 My mending and darning can’t make the world just and it can’t stop climate change.  But it is a point of meditation about how resources might move from me to other people or vice versa.  It is one of many things I might do that might make a difference, however small.  I intend to keep thinking about it and seeing what difference it makes.  I am already imagining how I might plan ahead enough to avoid suddenly deciding I have to buy something I really could make.  I already notice that I wear different things if I think I might never buy a new pair of jeans again.  And I am asking myself, often, and not only in relation to clothing, do I really need to buy that?  Because–there are a lot of people on the planet who need the resources represented by that purchase more than I do.  And the planet needs a whole lot less consumption going on, and especially by people like me–from the overdeveloped world.  So let’s see how this thought experiment comes along!

31 responses to “On the delights and satisfactions of mending”