I have a dear friend whose entire family are facing some very tough times.  I’d been wondering what I could do that might bring some comfort to her, and then I had an idea.  I knew she had a cardigan that had belonged to someone she treasured, and that it was showing signs of long wear and lots of love.  So I offered to mend it for her.  She chose some yarn and on some quiet nights last week I set to work. 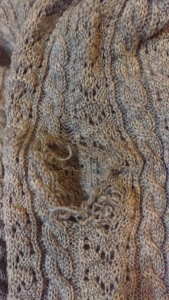 Darning is always possible, but sometimes it seems barely adequate to the task, and the result is unlikely to be pleasing.  I have darned holes bigger than this, but I did cover some of them with leather elbow patches afterward!

In the end I decided knitting in patches was a better idea.  I used needle and yarn to stabilise runaway live stitches.  Then I picked up some stitches, as you can see above. 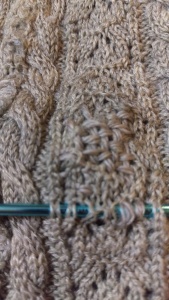 In a couple of spots I darned first and then picked up stitches.  See the woven section above the knitting needle?  Then it is really a process of knitting along and purling back, knitting two together at each side with a patch-stitch and a picked up strand from the garment.  There were some places where I added extra stitches or cast some off as I passed. 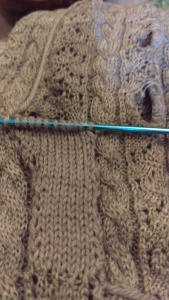 One sleeve got several patches.  I tried different ways of casting off (binding off) and decided hand sewing the stitches down was the smoothest finish.

There were smaller places where I did small darns or just trapped live stitches so that ladders could not spread further. 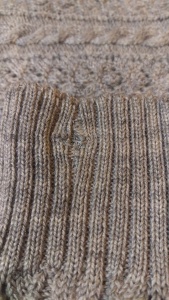 On the cuffs, I considered a few options before settling on using some of the silk thread I dyed with Japanese indigo.  The grey was pretty much perfect here and I was able to use a fine enough needle to stop the stitches that are unravelling going further.

There were four buttonholes but one button.  I couldn’t match it, so I sewed on four that have come off some other garment.

Because a cardigan can be worn open, I concealed the ends of the stitching, with the initial knot and the tie off under the button rather than on the ‘wrong’ side, where I would happily tie them off on a shirt.

And here it is.  Visibly mended but in a way I hope will mean this treasured cardigan will have an extended life providing comfort and warmth to my friend through times good and bad.

I know my friend is surrounded by the love and care of many friends and her family too.  I’m lucky to be among them. 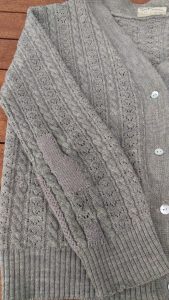 18 responses to “#MenditMay: Beyond darning”