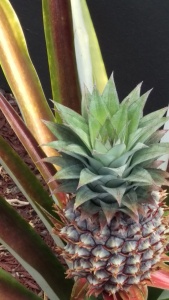 I went to Brisbane for work late last year, and Brisbane is really different to Adelaide.  It’s a tropical place.  On day one I found this pineapple just growing alongside the car park of the place where I was staying!  Public gardens in Brisbane are full of plants that require special treatment to grow in a pot in temperate Adelaide, or grow to only a fraction of the size. 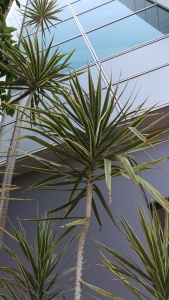 Strap-leafed plants grow everywhere you look.  Which is good, because I have taken up making string as part of a process for being in a place and thinking about its people and laws; more to the point, considering my obligations under Indigenous laws.  I do this at home, but I also do it when I travel. So I harvested dead leaves from various plants, left them soaking in the hand  basin while I was out, and had quiet contemplative evenings twining string. 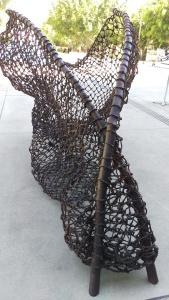 I also managed to visit the Gallery of Modern Art, and it was celebrating a big birthday.  This is one of the works commissioned for it, now located just beside the entrance.  It is by Judy Watson (Waanyi people, 2016) ‘tow row’. 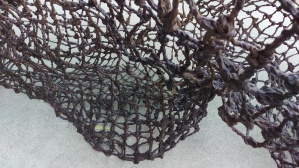 String was a theme (for me) as I wandered through the gallery.  This is a small part of Lena Kurriniya’s ‘feathered bush string’ (Kunjunwinku people, 2002). The string itself is made from Kurrajong inner bark, with bustard feathers. 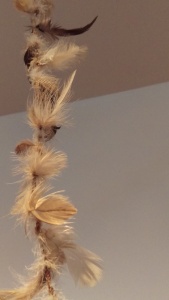 This exquisite mat was very nearly black and hard to capture in the light.  Maraana Wamarasi (Fiji, 2016) ‘Ibe Nauri’ (round mat). 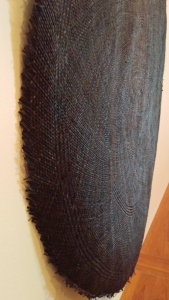 I loved the way the centre had been constructed. 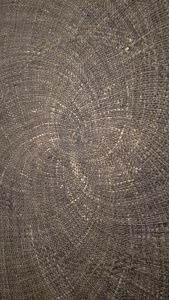 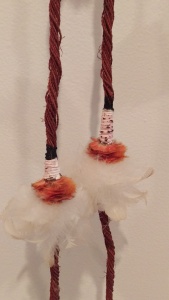 This string is made of bark fibre, and the entire work also uses cotton thread, human hair, feathers, native beeswax and natural pigments. 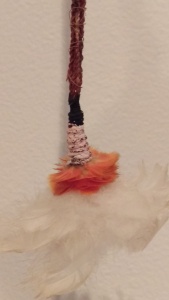 This next work drew me back to ‘tow row’.  Its creator is Dorothy Bienanwangu Dullman (Kunjunwinku/Dangbon people) ‘Wollobi’ (standing fish net) (2007).  It is made from knotted sand palm leaf string and wooden struts rather than metal, but gives a strong sense of what is being referenced in the sculpture pictured above. 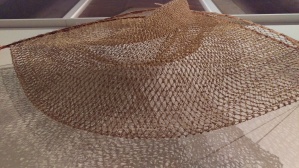 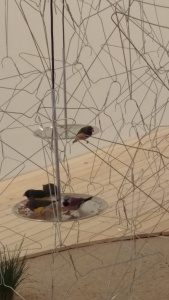 This was an installation taking up a huge room and a soundscape driven by dozens of finches, making their own sounds but also triggering sounds by landing on parts of the installation. I had a lot of time on my own in the room watching the finches and surrounded by sound as they flew, ate, and nested in little baskets. Delightful! 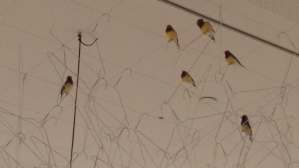 11 responses to “String in Brisbane”