Flowers at my Fingertips Hussif

In another radical transformation of vintage woolen blanket, I (more or less) followed the instructions for the Flowers at My Fingertips hussif/sewing kit from Christine Vejar’s The Modern Natural Dyer. You can have a sense of what she did (and some pictures of her hussif) by following this link. Above are prints from maroon coreopsis flowers I had in the garden at the time I was dyeing. I bought the plant at the Seed Freedom Festival and have just loved it. It is not enjoying winter though.

These are prunus leaves from a neighbourhood tree.  I cut binding from some linen pants that entered their second life some time ago. 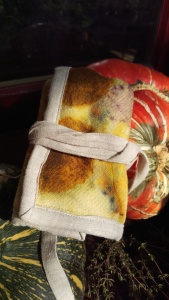 Some parts of the binding went more smoothly than others, but in the end the edge was reasonably neat.

So now I have a sewing toolkit that rolls up.  I really just wanted to make this pattern and try the dyeing strategy out, at a time of year when I had African marigolds, Mexican marigolds, Alyogyne Huegelii flowers, salvias and more to try out, and then realised that I also had something close enough to woolen flannel to try them on.  I’ll figure out where it will go to live later!

8 responses to “Flowers at my Fingertips Hussif”