I am a bit intimidated by indigo.  Perhaps I have just made it a major performance each time I have attempted it so far–overreach is a superpower I have in spades.  But the temperature maintenance, chemistry, my lack of experience and (in the case of the hydrosulphite vat) my aversion to the chemicals involved, all make me wary.  Anyway, I overcame my reluctance and ran a vat last weekend.  I made an assessment of the fleece I might dye –in varying states of yellowness and natural whiteness (with a little tan), corriedale and polwarth.

The quiescent vat has been dormant since January, since I failed to make a successful fermentation vat using ambient summer temperatures. It has only been waiting 10 months for resurrection!  It contained madder and bran as well as indigo due to its first life as a potential fermentation vat, so the night before,  I sieved out all the larger particles remaining rather than have them distributed throughout my already less than pristine fleece.

I wetted out my fleece and some brown polwarth slippers in readiness.

The vat was a far more exciting colour after warming and the addition of colour run remover. 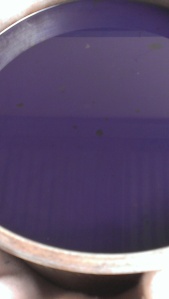 I had read Vivien Prideaux and Jenny Dean in preparation and realised some guesswork would be required. How much colour run remover?  How much could I hope to dye? Just the same, this is the second half of this vat I have managed to render useable by this method, another reason to think I should give up being intimidated and get on to practising fermentation methods.  Perhaps, just like sourdough bread, it isn’t as delicate as you might think at first–even if time needs to be on your side. It was very reassuring to see that telltale yellow-green colour appear under the surface on my silk embroidery thread.

Some of the yellow fibre going into the indigo:

And afterward, while still wet. Some of the greens will be quite emerald when they are dry, I think, but the paler yellows became blue rather than green.

The white fleece became many shades of blue in a very satisfying way that will let me create graduated yarns.  Here it is, going into the vat:

Here it is still wet but rather gloriously blue…

The slippers took up blue where they were white or pale purple from the tail end of a logwood exhaust bath, but took virtually no colour on the brown parts, which is to say, most parts.  It may be that the vat was exhausted–not completely, or the pale parts would not have taken up colour–but sufficiently that no colour change showed up on the brown.  It may also be that they were greasy enough to repel the dye somewhat and that so much wet fleece having entered it, the vat was diluted.  So I have kept the vat aside for another day or a new thought on the matter.

Meanwhile, there has been a breakout of the urge to spin silk and enter the cocoon…  But not for every single silkworm, and the ones that remain are SO HUNGRY!  So now I am off to look for a mulberry tree in the parklands I heard about on the weekend…